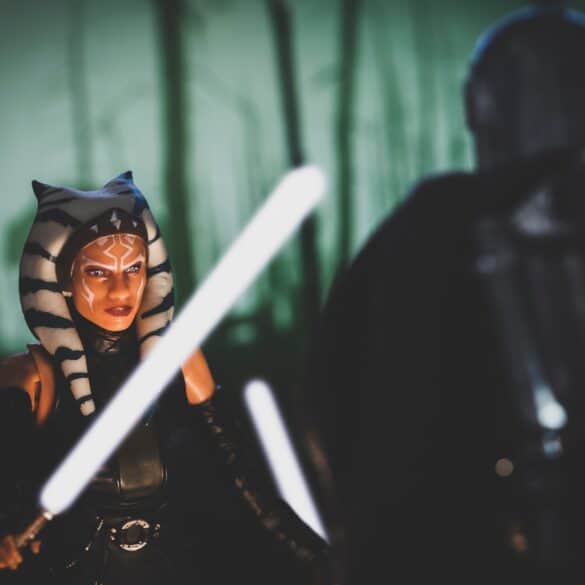 What Does the White Lightsaber in Star Wars Mean?

Home
Sabers
What Does the White Lightsaber in Star Wars Mean?

In the Star Wars universe, Jedi Knights and Sith Lords wield lightsabers of various colors. Each color lightsaber corresponds to the Force-user’s affiliation and beliefs, so what does the white lightsaber in Star Wars mean?. For example, Mace Windu’s purple lightsaber represents his ability to utilize the dark side of the Force without being completely enveloped by it. Darth Vader’s red lightsaber symbolizes his lifelong pain and trauma. You can read more about this in my Ultimate Saber Guide!

When Was the White Lightsaber First introduced in Star Wars Canon?

But what does it mean when a Jedi or Sith wields a white lightsaber? We see this practical answer play out in The Clone Wars animated series with Ahsoka Tano. After she leaves the Jedi Order, Ahsoka still fights for justice but does not consider herself a Jedi (she makes that abundantly clear). She abandons her first set of sabers–the green and yellow ones–at the memorable and emotional conclusion of the Clone Wars Series.  When Star War Rebels comes into the timeline Ahsoka has constructed a new set of sabers that ignite pure white blades.

So what is the significance and meaning of white lightsabers in Star Wars? Let’s find out.

Why Are Ahsoka Tano’s Lightsabers White and What Does the White Lightsaber in Star Wars Mean?

In the Star Wars universe, a Jedi’s lightsaber is more than just a weapon–it is a symbol of their connection to the Force. The kyber crystals that power the lightsabers are attuned to the light side of the Force. As such, the act of constructing a lightsaber is deeply significant for a Jedi.

For Ahsoka Tano, a former Jedi who now wields white lightsabers, this act takes on even greater meaning. After leaving the Jedi Order, she purified two kyber crystals from the saber of an inquisitor she defeated and constructed her new lightsabers as a way of reaffirming her commitment to the Force, but without the constraints of the Jedi and without falling to the dark side. In doing so, Ahsoka has embraced her new identity and embarked on a journey of self-discovery.

The most obvious meaning of Ahsoka’s white lightsaber is that it represents her lack of affiliation with either the Jedi or Sith. By crafting her own weapon from scratch, Ahsoka is signifying her independence from the orders that have previously defined her life. She is no longer bound by their rules and regulations and can forge her own path free from their interference.

How Is a White Lightsaber Made?

The strongest stars have hearts of kyber – Chirrut Imwe

As previously mentioned, in order for a kyber crystal to emit a white blade it must first be purified. Kyber crystals naturally resonate with the light side of the Force and, therefore, emit blades in blue, green, and yellow color families. When they are bled by a dark side user, the blade burns red. You can read more about red saber in this article. So how are kyber crystals purified?

This may be disappointing, but the answer is that we don’t really know.  The act of purification balances a kyber crystal.  The result will be a crystal that does not lean either to the light or to the dark side of the Force–it remains perfectly balanced in the middle, therefore emitting no color whatsoever.

What we do know is that it takes focused meditation to form a strong bond with the crystal through the Force.  This could imply that not all Jedi are capable of purifying a corrupt kyber crystal.  The Force was always strong with Ahsoka Tano, and those particular crystals had been calling out to her (almost as if they were asking to be rescued).  This could explain how she was able to form a bond and purify them so quickly.

White is among the rarest colors for lightsabers.  According to official Star War canon, Ahsoka Tano is the only character to have wielded white lightsabers.  However, according to Star Wars Legends and other non-canon sources, there have been a few others:

Orla Jareni – a wayseeker during the High Republic Era.  Wayseekers similar to Jedi Sentinels that operated independently from the Jedi High Council.